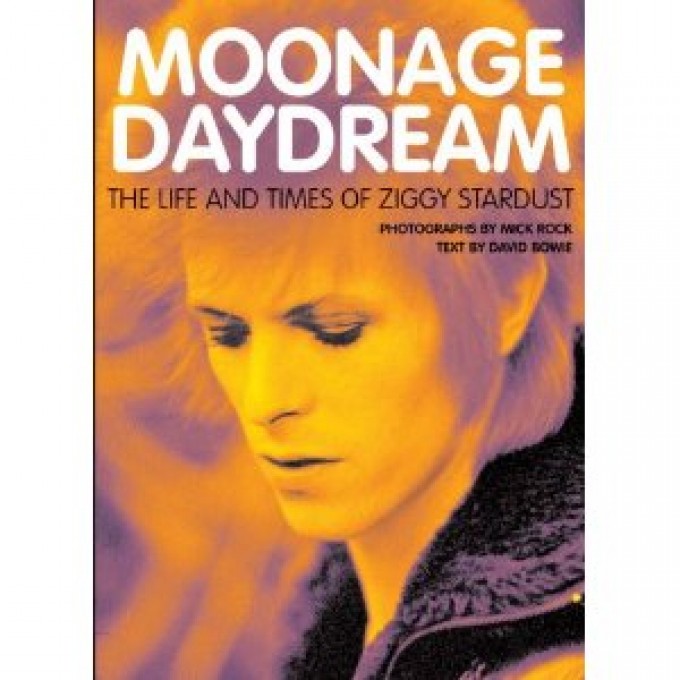 In 1972 David Bowie released the iconic LP The Rise and Fall of Ziggy Stardust and the Spiders from Mars, which established him as a major force in modern pop music. It was also his platform to present a visually fascinating and sexually ambivalent stage persona called Ziggy Stardust. Simultaneously, Bowie befriended the famed rock-and-roll photographer, Mick Rock, whom he invited to chronicle his Ziggy persona on film. Mick Rock amassed an amazing archive of footage that traces the entire stratospheric two-year career of Ziggy Stardust-from the early acclaim to the pivotal American tours, and the final blockbuster concert that marked Ziggy’s retirement.Ziggy was a combination of extraordinary costumes, colorful makeup, outrageous hair, and-above all-first-class rock. More than 650 of Mick Rock’s compelling pictures reflect his amazing collaboration-and friendship-with Bowie. The result of this incredible collaboration is a vast album of images of onstage performances and backstage antics. Together, David Bowie’s text and Mick Rock’s images trace the rise and final swansong of Ziggy Stardust. This affordably priced edition will be a must-have for every fan.

In 1972 Iggy Pop & The Stooges flew into London to record a new LP Raw Power. With David Bowie as executive producer, Raw Power proved to be an instant classic. During this time The Stooges, perpetually wasted, performed a single concert in London s Kings Cross. This whole crazed period of Iggy s phenomenal career was captured on camera by one man Mick Rock. An unparalled document of Iggy at the height of both his musical powers and his legendary excesses. Raw Power also serves as a unique visual diary of the heady times which produced one of rock music s most enduring recordings whose famous cover shot captured by Mick Rock is now indelibly established in modern pop iconography. SELLING POINTS: Contains over 200 amazing photographs as well as interviews, conducted between Mick Rock and Iggy Pop in 1972. Originally published by Creation Books in 1999, this new edition with a foreword by Mick Rock and Iggy Pop contains extra previously unseen images and entirely new textual and photo layout.

A collection of pictures from the award-winning photographer Mick Rock, featuring some of the most seminal images of the glam-rock era.