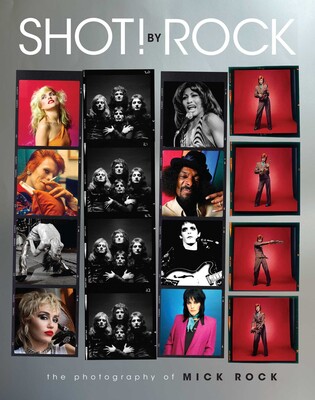 SHOT! by Rock The Photography of Mick Rock

The iconic photography and tales of famous musicians and rock-and-roll legends,
all from “the man who shot the Seventies” himself, Mick Rock.

Born in 1948 in Hammersmith, London, Michael Rock rose through the London rock scene of the late sixties and seventies en route to becoming one of the most iconic rock & pop photographers of all time.

Mick’s lifetime of work is collected in SHOT! by ROCK (Insight Editions; November 22, 2022)– a deluxe monograph full of Mick’s signature, color-saturated photography and iconic subjects. The book’s publication is timed to celebrate what would have been Mick’s 74th birthday on November 21st.

Mick was both photographer and friend to some of the most dynamic and enthralling musical acts and stars in rock history, and the book contains amazing and amusing behind-the-scenes stories of musicians from Mick Jagger to Miley Cyrus; from Queen to Lana Del Ray; from David Bowie to Snoop Dog, and well beyond. The book is closely inspired by the acclaimed 2016 documentary SHOT! The Psycho-Spiritual Mantra of Rock, which also detailed Mick’s life and work.

Mick hand selected photos and contributed brand new stories from his amazing career for SHOT!. Insight Editions is humbled to known him and have worked with him on the final piece of his life’s creative puzzle, and hopes this book serves as a monument to Mick’s brilliant fifty-year career and astounding life.

“Over the last year of Mick’s life, it has been my great honor and privilege to witness his love and passion, and the many bittersweet hours while he nurtured the creation of this book. It is a very special collection by a uniquely brilliant photographer, which spans decades and illustrates the path that defined his life.

There was nothing more amazing than to be on the receiving end of Mick’s camera lens. To be at one of those shoots that lasted hours–and maybe all night–at which Mick burned through rolls and rolls of film, with music playing and where everyone present gave everything. With Mick at the helm, the very essences of the artists who created the sounds of our time were being captured in images to last well beyond our lifetimes. And this is because Mick masterfully sought out the aura, the unique persona, the symbolic resonance–and once discovered, he ran with it.

Mick’s eye was always rock n’ roll, not to mention his heart, whether photographing musicians, actors, miscreants or kitty cats.

His relentless curiosity, intellect, and enthusiasm morphed into new and exciting creative collaborations with his subjects and from there the relationships blossomed into love and loyalty and trust.

When we bare our souls, we need to trust the captain of the ship. On his ship, Mick Rock created an environment in which you could become what you dreamed, yet still remain comfortable in who you are.

Here are only some of his legendary photographs….”

For my sins in a former life, I’ve been forced to spend an inordinate amount of time with musicians in this life. Of course, I love them.

A camera is a wonderful ally. It requires minimal maintenance and provides entry to a world of endless imagery.

My ambition was not to be a great photographer (though that certainly would have been a worthy stance). It was a lust to embrace anything that startled or energized me.

Without the rock ‘n rollers, I would not have developed as an image man.

You want to shock people with a bit of mystery and beauty. That’s my favorite kind of shocking.

I’ve never felt like a voyeur, although I’ve certainly done plenty of looking!

There’s an art to looking back - how to celebrate the past without being entrapped by it. Photographs provide the great physical link.

My allegiance was always to the act. I wanted them to be happy. I wasn’t owned by a magazine or a record label.