Yeah Yeah Yeahs have been on “a bit of a hiatus” since the release of Mosquito in 2013. “We have to wait to get the urge, get that itch,” Karen O told NME in 2014. “The time needs to be right and we’re OK waiting for that, I think.” Well, the time was apparently right last night, because Yeah Yeah Yeahs reunited at NYC’s Dream Hotel to play an afterparty celebrating the premiere of rock photographer Mick Rock’s new documentary Shot! The Psycho-Spiritual Mantra Of Rock, as Rolling Stone reports. Rock’s photos have graced the covers of albums like Lou Reed’s Transformer and the Ramones’ End Of The Century, and he served as David Bowie’s official photographer in the 1970s, so it makes sense that Yeah Yeah Yeahs teamed up with TV On The Radio’s Jaleel Bunton and keyboardist Money Mark to kick off the evening with covers of Bowie’s “Moonage Daydream” and Reed’s “Perfect Day.” Karen O and Nick Zinner also performed the Ramones’ “Sheena Is A Punk Rocker” without drummer Brian Chase, who was replaced by Marky Ramone. Watch some clips from the show here: 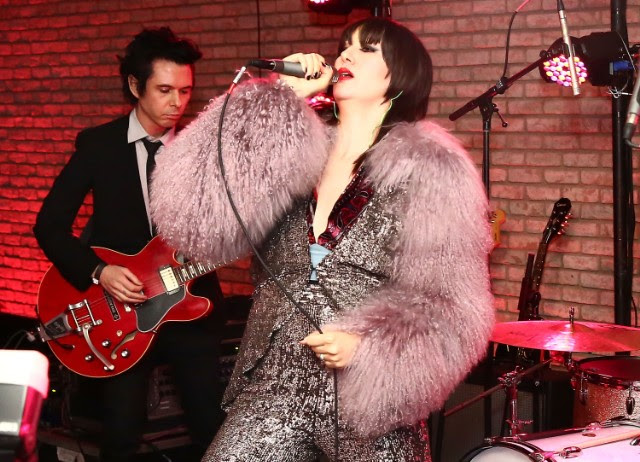