Mick Rock Opens Up to Vogue.com About His Years With David Bowie 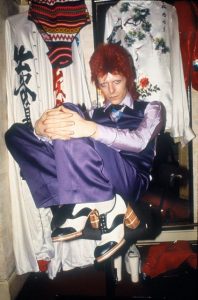 At times it’s easy to forget that David Bowie is not, in fact, a lean, extraterrestrial rock god sent down to bless us mortals with the gift of glam. Not so, one assumes, for Mick Rock, who bore more intimate witness to Bowie the Man than perhaps any other living lensman. From 1972 to 1973, while Bowie was in the throes of the glittering, feline Ziggy Stardust persona, Rock served as his official photographer. That period is now the subject of Taschen’s new epic coffee-table book, Mick Rock: Shooting for Stardust, The Rise of David Bowie & Co., coming out later this month, along with an accompanying show at the publisher’s Los Angeles gallery on September 9.

Rock regularly shot the Holy Trinity (David, Lou, and Iggy), but the book’s most compelling images are of the boy from Brixton off-duty, many of them never before seen—David doing his makeup before a gig, reclining on the tour bus, even sleeping. The vulnerability of the pictures shed a new light on music’s greatest chameleon, a man for whom iconic images are the norm. We recently caught up with the photographer, who got candid about his first encounter with David, life on the road, and Bowie’s vision of “a rock ’n’ roll in flaming Technicolor.”